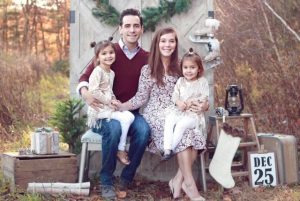 Drew grew up in East Hanover, NJ as the youngest of three children. After high school, he attended Lock Haven University in Pennsylvania and studied Business with a specialty in Finance and Economics. Shortly after graduation, he moved to Charleston, South Carolina and later married his college sweetheart, Colleen. During their time in South Carolina, Drew began to pursue his future with Chick-fil-A. By working alongside his sister-in-law, CFA Centre Pointe operator Deborah Blind, he was able to see a long term future for himself and his family as a Chick-fil-A operator.

Their journey to becoming franchisees lead them home to the PA/ NJ area. While in PA, Drew worked for Luke Cook, a team and community centered operator that helped Drew continue to grow as a potential operator. During that time frame, Drew and Colleen were blessed with two little girls, Sarah and Juliet. His dream of owning/ operating a Chick-fil-A franchise came true the day Drew grand-opened a location within Garden State Plaza mall. After three years of enjoying being an operator, the dream of bringing Chick-fil-A to his home county of Morris County became a reality. Drew relocated to the Free Standing Restaurant in Morris Plains, NJ. And now the family of four lives and works in Morris Plains, NJ.

Drew often quotes “We are in the people business, we just happen to sell chicken.” He is passionate about developing his team and also supporting the surrounding community. The Blinds have a deep love and commitment to Morris County.

We love partnering with local businesses and organizations for donations, restaurant events, and catering needs. Due to the high volume of donation requests that we receive, we unfortunately cannot honor all donation requests. Simply fill out the form below and someone from our team will contact you soon.